In western tradition communication takes place mainly through acts of speech, with respect to which mimicry assumes an increasingly secondary importance. The oldest attestation of this fact is provided by Aristotle who states that there is a close correspondence between the ten categories of thought, ie the supreme ontological principles used by man to classify the knowable reality, and the rules of the grammar,  that are necessary for the construction of sentences, phrases and words of a given language. In other words, our culture is closely linked to the phonetic model, to the world of words, to the point that one could not formulate an argument without first activating a kind of discourse in which words are mentally formulated. So the way we think is like talking without using the voice.

On the contrary, the data provided by primitive and prehistoric cultures confirm that there is an inseparable link between the thought and the way of expressing oneself directly with body. In the archaic tradition body is considered the main communication tool, to the point that the spiritual element itself is able to act only if it is supported by  a gestural tool. In his research, the anthropologist Marcel Mauss, has shown that for primitive man every gesture is endowed with an intrinsic ability to interact with the world and to produce positive or negative effects on it.  For Mauss “technical action, physical action, magic-religious action are confused for the actor” (MAUSS, 1935).

In 1938 the philologist Tchhang Tcheng Ming  has also shown how the most archaic stages of Chinese writing derive from the language of gestures. In fact, many of the signs used in it do not directly represent natural objects, but are schematic reproductions of the corresponding descriptive gestures. The position of the praying man with raised arms, for example, that in conventional mimics designate the “tree” object, is used by writing to represent the word “tree”. 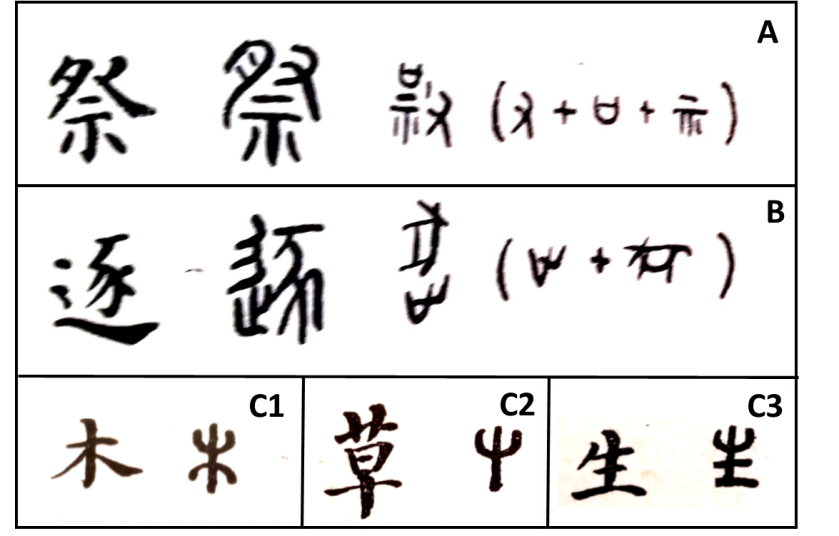 In the image above the element A (shown in the three forms of Chinese writing: ancient, middle and modern) is composed by three elements (added in the parenthesis) whose set determines the meaning: hand + flesh + divinity = sacrifice. The element B consists of two elements: foot + wild boar = to chase. >In the element C  the gesture of the raised arms designates the tree: C1 = tree; C2 = grass; C3: grass + soil = grow (Tchang Tcheng Ming, cit. p. 62). It should be noted that the Dakota Indians make the same gesture of growth slowly raising the right hand placed in front of the body, with the back facing forward and the fingers separate; to indicate the growth of the grass they do the same gesture near the ground (Mallery, cit., p. 343) 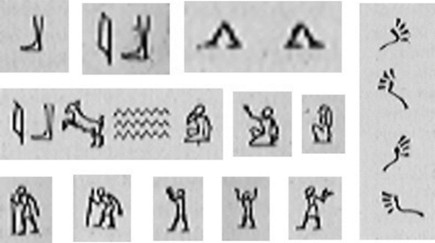 Even Egyptian writing was not entirely phonetic and the polyvalence of the hieroglyphics would make them incomprehensible if their meaning was not better specified by the addition of some gestural determinative signs. The phonetic sign is always accompanied by male or female figurines; an official is made by an anthropomorph who walks by holding the rod, a symbol of authority; an elder, from a curved figure leaning on a stick; a cult scene is identifiable by the presence of an anthropomorph in the pose of the worshiper, and so on. In addition to the whole human figure, single parts of the body are used: a nose is the determinative to “smell” or “breathe”; an ear to “listen”; the head indicates command, precedence, superiority. Every reference to the act of walking is accompanied by a pair of legs; if the return is indicated, the direction of the feet is reversed. In the book of the dead, where it is written that the virtuous soul has the privilege of entering and leaving Hades, the sentence is concluded with both determinatives, two pairs of legs, one facing right and the other on the left.

At the end of the nineteenth century the anthropologist F. H. Cushing, studying the culture of the Zuni Indians of New Mexico, was the first to understand that the psychological formation of the concepts of that people, like other primitive peoples in the world, is in close relationship with their way of expressing themselves in gestures, to the point that Cushing talk about “manual concepts”.

Also the mnemonic songs reported by G. Mallery (Picture-writing of the American Indians, 1893) document the central function that the body and gesture play in the language of the Ojibwa Indians. If we take into consideration the Ojibwa  “mnemonic songs” , we can see that most of these pictographs deal in particular with the  human figure, caught in particular and significant gestural poses or dances, or some parts of the human body (arms, hands, head, legs, etc.) to which a meaning related to a particular function is entrusted. The image reactivates a specific mnemonic sequence so that the message, which must be recited or sung in the canonical form, is remembered at the appropriate time.

The mnemonic song above is the visual representation of a ritual song. Each of the 8 images is a mnemonic craze to remember a verse of the song: A) A hand is inserted into the earth in search of the remedy (the cure); B) the headless body that emerges out of the circle is a mysterious entity: it expresses the positive and healing energy of the earth, which the singer makes available to the young and inexperienced shaman; the vertical line indicates the moment of the song in which the dance begins; C) the outer circle is the meeting point of the medicine men, the inner circle is the heart of the singer; the lines on the circle indicate the shamans participating in the meeting; D) The head with the zig-zag lines coming out of the eyes indicates the intensity of the shaman’s gaze; the importance of his participation in the ceremony is thus recognized; E) the body of the bear crossed by the line indicates the presence of a spiritual entity endowed with great power; F) The zig-zag lines that come out and enter the ears express knowledge about the things of the higher realm and the secrets of the earth; G) The otter, symbol of the god Manitù, the one who sends precious information to men, comes out of a sacred space; H) the arm on the circle indicates the power to receive a mysterious power from God. (Mallery, 1972, pl. 17, p. 233).