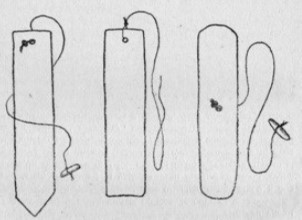 Bullroarers used by kids of Friuli, northern Italy (from Battaglia, 1921).

The bullroarer is a small wooden board, shaped flat, of various size, often decorated with abstract marks, with a hole to which a short rope (made of vegetable fibres or animal hairs) is fastened. The whirling movement that the hand, through the rope, transmits to the bullroarer, produces a deep, dull and intermittent sound. In the primitive cultures this instrument has a magical and initiatory function. For this reason it is not accessible to women or young boys until the moment of the initiation rites. The Maori bullroarer (purerehua) is traditionally used during the healing rituals or with the aim of getting rain and to direct the evil spirits towards other worlds. So it is the “most ancient, most widespread and most sacred known religious instrument” (Haddon).

In 1893 Giuseppe Pitré, in his essay on Sicilian games, describes a toy shaped like a rhomb called lapuni (big bee). A study of 1921 carried out by Battaglia points out the presence of the bullroarer among the ancient games of Friulan children. Its presence is attested in the Alpine culture through the late ’60s. In many parts of Scotland the bullroarer was thought to protect from spells and from lightning. 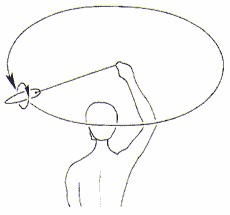 The rotation produced by the arm on the rope that holds the bullroarer, makes it circle around itself until it makes a very grave humming.

The bullroarer is widespread in ancient Egypt and in Mesopotamia. In classical Greece bullroarer is used in the rituals performed by the Thracians and mentioned by Aeschylus. In the primitive world the Bullroarer is a ceremonial instrument whose sound is the voice of a spirit, a deity or an ancestor. For this reason it is considered a symbol of fertility. Still today it has an important role in the rites of passage in many parts of the world. In the cultures of south-eastern Australia, the sound of the bullroarer is the voice of the god Daramulan. An effective bullroarer can be cut only from a tree that contains its spirit. Bullroarers are used in the initiation ceremonies of men, and the sound they produce is used in some indigenous cultures to repeat the sound of the Rainbow Snake, a creature of the Time of Dreams, linked to the Earth, to Water, to Life, to social relationships and to fertility. 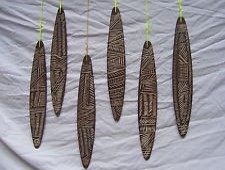 Bullroarers of Australian aborigines. The sound produced by this instrument according to the aborigines is “the voice of the ancestors”.