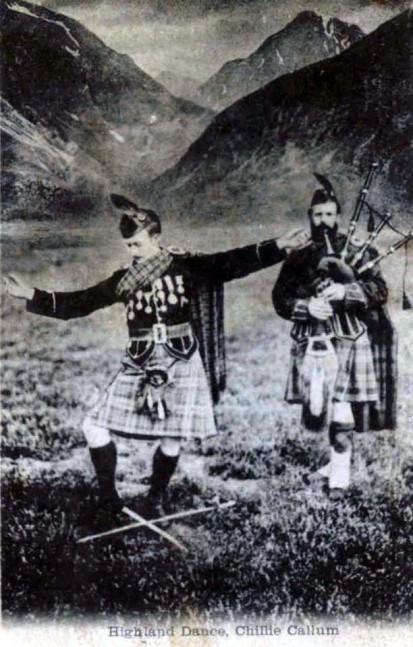 The Ghillie Callum is one of the oldest Scottish sword dances. The myth tells that Prince Ghillie Callum, the Celtic hero of the Battle of Dunsinane (1054), after killing one of the enemy commanders placed his sword on the ground and crossed it  together with that of the defeated enemy starting to dance over it. Soon this act of dancing on two crossed swords was repeated by all the highland warriors, becoming an essential moment before any battle. In the beginning, the dancer performs a series of steps around the swords keeping the back straight, the arms raised and the hands in a particular pose. At this point he turns to the swords while two living beings and ask them for permission to dance above them. The dance continues with a repeated jump in and out of the four spaces created by the crossing of the blades, avoiding standing with their backs to their swords and moving counterclockwise along what is called “the witches’ path” (widdershins). The dance requires great dexterity because, despite the speed with which each step is performed, the dancer must not touch or move the swords, under penalty of death (yesterday, in battle) or penalty (today, in the games). It is possible to give an interpretation of this dance if we analyze the matter starting from two indisputable facts: (1) the geometric shape on which the dance is performed is the image of a diagonal cross, a very common symbol in Western iconography since prehistoric times; (2) the dancer moves between the blades according to a strict sequence of steps whose importance is linked to the cosmological value attributed to the shape of the space. We are allowed to think that what happens outside and inside the geometry drawn by the swords is not at all random. The intriguing hypothesis consists precisely in attributing to the diagonal cross, and to the choreutic act that takes place in that space, a deeper and much more ancient cosmological meaning than the legends that attribute its beginning to the Middle Ages. In other words, the warrior who dances in the spaces between the blades moves rhythmically within a miniature cosmos, just as the child does when jumps into the Hopscotch game boxes and pays a pawn when he puts his foot on the line. Therefore, the geometric symbols that appear in prehistoric iconography express a specific orientation towards those points on the horizon to which a special value has been recognized. The geometric figures are archetypes that have crossed the millennia and have come to this day after having lost the original symbolic value or having adapted it only to the times. 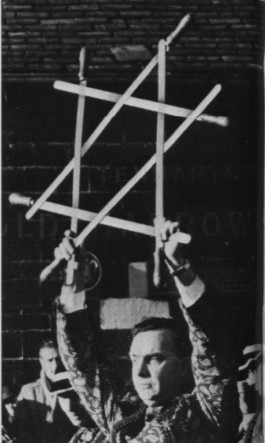 The cosmic symbols of the center (axis mundi) – the most suitable place for the manifestation of the transcendent – which express a strong idea of ​​passage (anodos) between the levels of the cosmos, constitute the spatiotemporal foundation of the sword dance. These characteristics can probably be found in all european Swords Dances, but in some of them, like Fenestrelle’s “Bal do Sabre“, they are even more evident. Harlequin also participates in this dance, a nice and spiteful creature halfway between the earth and the underworld that, after being put to death, returns from the underworld on the earth passing through the star made with the swords of the dancers, a clear reference to nature that is renewed at the beginning of spring.

A similar path can also be found in some Spanish, German and French armed dances, such as the one performed in Quevaucamps, around which a fun half-man and half-wolf entity moves, which, after its killing, is reborn and travels along the path of elevation.