In 1962 J. Bronstedt wrote the book “Nordische Vorzeit” (Neumunster, 1962), which describes the interesting researches carried out by archaeologists on Bronze Age burial mounds of northern prehistoric Europe (15th-5th centuries BC). In Denmark, these megalithic structures, entirely underground and known as “flat hills” (Flachhügel), were used for the celebration of funeral ceremonies connected to the cult of ancestors and fertility. The archaeological excavations carried out on these mounds have indeed brought to light perfectly preserved tombs, with the mummified body of the deceased still housed in his wooden sepulcher within propitiatory offerings, like the braids of carefully dressed styled female hair.
The summit of these mounds is perfectly flat, therefore particularly suitable for dance performances. For this reason, the popular tradition has sent them the name of dansehøj, dance hills (German: Tanzhügel). The diffusion area of these hills is very wide, to the point that some of them are known in Scania (Sweden) with the name of danshögar, Swedish term for dansehøj. But the link between megalithic culture and dance does not end here. In addition to the toponym “dance hills”, which gives us a distinct idea of their function, the folk tradition has transmitted us many legends that date back to the first period of Christianization and provide us an almost universal explanation of the birth of megalithic monuments, in which the functionof the dance is again highlighted. According to ancient popular legends, the mounds found in Bärenbühl (Black Forest, Germany), although smaller than Danish ones, were the seat of mysterious cults during which witches performed wild dances. Toponyms related to dance are common to the three types of megalithic monuments scattered throughout Europe, especially in France and Great Britain:
1 – cromlech (stone circles). Many legends describe the birth of stone circles as a consequence of the petrifaction of girls who, instead of participating in Christian religious ceremonies, had preferred to meet in hidden places to dance. 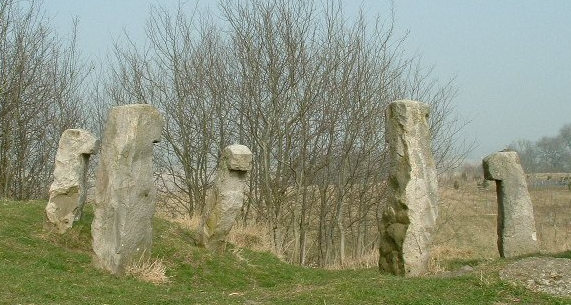 The legend of the “Bonnettes” (bad girls) of Sailly (France) tells that six girls went to a mound near the village to dance accompanied by a musician. After a long time God, fed up by the high jumps and the squeal of music, decided to punish the dancing girls by turning them into stones.
In other cases, like that of the “Demoiselles of Cojoux”, the young girls were petrified by God because they preferred to dance rather than go to Sunday mass. The “Demoiselles of Langon” suffered the same fate because they did not go to vespers. Also in the English folk tales the “Trippet Stones”, the “Merry Maidens”, like all nice companies that gave the name to many British cromlechs, are nothing more than young girls turned into stone for having danced during a Sabbah.

2 – Dolmen (tomb structure composed of two or more stones set in the ground that supports a horizontal slab). A legend linked to the Dolmen of the “Pierre Folle” tells that a young man from Saint-Priest, while returning to the village at night, saw seven horrible ghosts dressed in white who danced the saraband around the dolmen. Once the presence of the young man was felt, the ghosts turned into seven young girls, as beautiful as the day, while the most beautiful of them stared at the musician (the devil). Blaise has had the misfortune of falling into the sensual trap thrown by the most seductive of these girls. The following day some peasants saw the young man, now deprived of his mind, embraced the dolmen. Since then, all the villagers avoid approaching the dolmen after sunset, for fear of being approached by the seven girls.

3 – menhir (standing stone placed in the middle of a ceremonial space). An old postcard is able to give us a rare example of how some archaic rituals such as dance have a very high capacity to remain in time and resist changes. The photo, which dates back to the early ‘900, documents the dance performed by some girls around the “Stèle de l’Eglise” in Plonéour-Lanvern (Finistère, France) on the Feast of Forgiveness. Despite the Christian setting, evident also in the name attributed to the menhir, the context of this dance is still the protohistoric one. Therefore, it can be assumed that the first dance performed around this monolith goes back to the time of its construction, that is to say to the late Iron Age (III century BC). All these legends confirm that ritual dance was one of the most important ritual expression of the Megalithic Europe peoples.
In the book “The Stone Circles of the British Isles” (1976) the English archaeologist Audrey Burl added some interesting details to the state of play just outlined: 1- the bottom of the moat surrounding the mound of Winterbourne Whitchurch (Dorset) was made fluid by the movement of dancing feet; 2 – in the tumulus of Sutton 268 (Glanmorgan), the performers of the ritual – which Burl calls dancers – left the mark of the repeated turns performed around the main burial before making the mound above it.

The figurative tradition that comes closest to the spirit of megalithic culture is expressed by the stele-menhirs of the ancient bronze age from Valcamonica (second half of the 3rd millennium BC), on which dozens of dance scenes were found expressing a sacred choreutic model. The main side of the Boulder n. 3 of Cemmo (Capodiponte, Valcamonica) is engraved with a dance scene performed by 44 anthropomorphs with a triangular torso, open legs and the horizontal arms resting on the shoulder of the anthropomorph at side. The dancers are distributed on five lines, “in one position – says Prof. Angelo Fossati – who we still see today in some Balkan dances” (Fossati, Le Pietre degli Dei, 1994). On the back side of the Boulder are engraved 20 anthropomorphs arranged on five lines, not joined together but portrayed in the act of turning their “big hands” towards the boulder itself. This gestural pose could be understood in two ways: on the one hand, if we imagine the twenty actors of the ritual facing the boulder, the action aims to absorb from the boulder (axis mundi) the cosmic force emitted by the Cosmos, in order to put it available to the community; on the other hand, if we imagine the anthropomorphs with their backs turned towards the boulder, the action consists in giving back with the hands to the community the energy absorbed by the rock.

The idea that guides the tracing of the entire surface of the boulder nr. 3, it is probably that of representing in detail the ceremony that the prehistoric community actually performed around a boulder, symbol of the center. This ceremony involved, on one side of the boulder, the execution of a dance in line, and on the other side a ritual performed by individuals endowed with “power” (shamans?). All the other elements represented on the Masso n. 3 (wild animals, halberds, daggers) but also those represented on the other boulders (plowing scenes and various cosmologic symbols), constitute the concrete objectives that the prehistoric community intended to achieve by performing the ritual.